After using Shutter for almost a year or more if I recall correctly, I got fed up of it’s broken Imgur upload plugin, considering those upload plugins are written in Pearl Scripts .pm I guess I could have tried and edited the script. For those who aren’t familiar with what Imgur is, it is an image host, free, fast, optimized, secure and very resourceful for image sharing. It started from Reddit and now it is one of the most amazing image hosts out there, probably the best if you ignore Google+ Photos.

It gives you an ability to edit/update images with various built-in sets of tools and features.

Nothing wrong with trying and creating one for yourself, I suppose. The script I wrote makes use of Imgur’s OAuth 2.0 authentication using pin to authorize, confirm and revalidate access_tokens.

All the steps are included in the Python script itself, therefore, I don’t think the user will have much trouble configuring things around.

You need Python installed in order for Python script to run, it’s a given. In addition, we make use of various Python libraries to make our scripting (running) easier.

Once the installation process is complete, let’s create a SymLink to our Python Script.

Creating SymLink is a very easy task, all we need to know is where to store our file securely and how to create a reference link for it, more like a pointer in C++, really! Download the Pymgur.py from the source or just copy paste the code and create a file in your system. I like to put the scripts I develop and use in a specific directory at ~/Documents/Scripts/ which is where I’ve mine Pymgur.py stored, easier to backup and easier to share.

Before we create a SymLink, let us give proper permission to our Python script using

Let’s say Pymgur’s full path is ~/Documents/Scripts/Pymgur.py, head over to /usr/local/bin and enter this code to create a proper SymLink to your file.

That should do it, go to some random directory and try Pymgur.py should work, if you set everything up.

The following Python script does not create a configuration file needed so we are going to have to create one ourselves. Our full package script consists of two files.

If you are unsure what values go in the configuration file, run the script, it’ll guide you through. Re-run the script to get prompted with different steps, keep an eye out on your terminal. 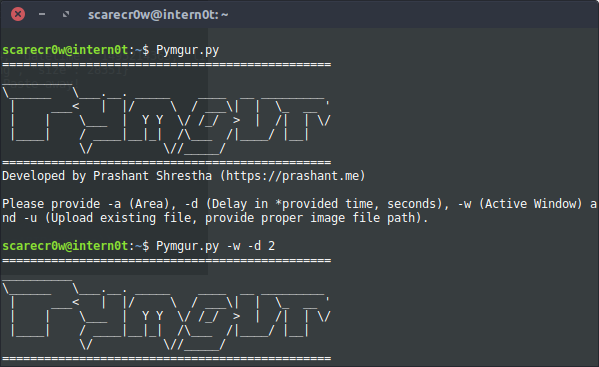 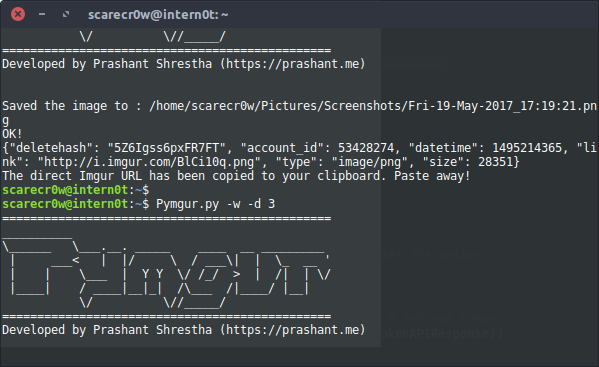 Improvements: This script can definitely be improved for ease-of-use and multiple other things, feel free to do so. Do let me know if you improve it, I would definitely want to give it a test.